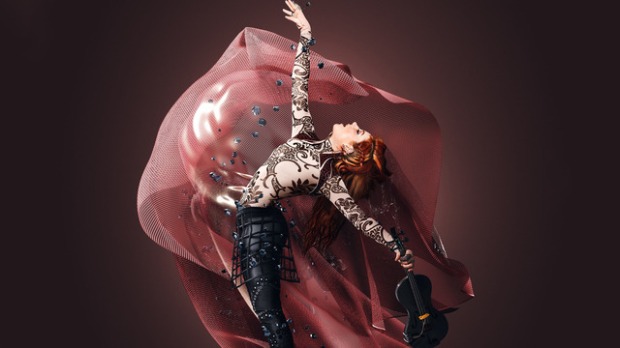 Once upon a time, there was a young and quirky dancing violin player who believed that both her bow work and foot work could land her a successful career in music. Determined to follow her dream, she presented her talents to any agent and record company she could land a meeting with. She even took to national television by appearing on America’s Got Talent. Much to her dismay, the judges on the show promptly declared that her music sounded like strangled rats and that they didn’t believe she had the capability to sell out a theatre. Years later and after four world tours, Lindsey Stirling has proven all of them wrong. She brought her Brave Enough tour to the Sony Centre for the Performing Arts earlier this week and, yes, she sold out the house.

The dancing violinist has placed her stamp on a wide range of genres from classical to contemporary in the forms of dubstep, hip hop, pop and even pop culture musical medleys from The Phantom of the Opera to Lord of the Rings. She has inspired a generation of young people to explore instrumental music and perhaps not dismiss the classical lessons that mom and dad insist on. When agents and record labels failed to believe in her vision, Stirling took to YouTube uploading her performances, vlogs and music videos to her channel that now boasts well over 8-million subscribers. She is now one of the most successful YouTubers in the world.

For all these reasons and more, Lindsey Stirling embodies what it means to be a massively successful self starter and how following your dreams can make anything possible. That message is carried through in her Brave Enough tour in support of her latest album of the same title. Many of her new songs on the album were inspired by the concept of conquering fear and facing adversity head on. Her theatrical stage show — packed to the brim with skilled dancers, lightning quick costume changes, a dazzling light and projection show, and even magic tricks — brings all of this to life.

This is not my first time seeing Stirling perform live, the last time being at the Kool Haus where the general admission atmosphere meant fans could mingle, move around, and most importantly dance. The Sony Centre brings a completely different vibe to this show, namely a seated audience, but it lent itself to the performance being more of a theatrical stage show. The carefully crafted projections were bright and sumptuous, projected both behind and in front of Stirling and her dancers via a mesh screen, thus creating a fairy tale world that brought her music to life. Some of the best concert visuals I’ve seen in a long time. Definitely a sight to behold.

Stirling was full of energy and vigor throughout her show. She jumped, high kicked, twirled, and made full use of her dance training throughout her act. Her and her team of four female dancers incorporated elements of ballet, contemporary, hip hop, and even Bollywood into their routines. Needless to say, the dancing alone is hard enough but playing the violin while accomplishing those moves is simply remarkable. To the trained ear, it’s noticeable that Stirling missed a note here and there in her playing, but that just shows that she does play live.

Stirling played numerous fan favourites from her varied discography throughout the show including her break out hit “Crystallize”, “Elements”, her latest release “Prism”, “The Arena”, and her hit single “Shatter Me”, where Stirling even showed off a bit of her vocals by singing the first verse before letting her violin take care of the rest.

A zany and funny video of Stirling backstage dealing with her band resulted in Stirling running back on stage with a very small child’s violin. Her band joined her, sitting on the floor ready to play a toy piano and toy drums. In this manner, Stirling played the first song she ever learned to play on the violin – “Twinkle Twinkle Little Star”, but far be it for her to leave it at that. Part of Stirling’s original draw for fans was her pop culture medleys and she indulged her fans by playing themes from The Legend of Zelda and Pirates of the Caribbean.

The great thing about this show is how clearly candid Stirling is about pretty much everything in her life, from her Christian beliefs, to the quirky and off-the-wall antics she gets into with her band and crew members off stage, to the pain she still harbors for the loss of her dear friend and piano player, Jason “Gavi” Gavati, who lost his battle with cancer last year. For most of the audience who are likely subscribed to Stirling’s YouTube page, they would have known all about Stirling’s candidness as many an iPhone video exists of her life on tour, on vacation, battling depression, and spending time with those close to her including Gavi. It was clear how much the two of them cared for each other and how much he meant to her. When Stirling’s voice cracked as she spoke so fondly of him, about how she finally finished the song they had begun writing together just before he passed, there wasn’t a dry eye in the house.

On that note, “Gavi’s Song” is heartbreakingly beautiful.

On a more uplifting note, Stirling introduced the audience to a little lady who ended up completely stealing the show — Luna, her chihuahua, who also wore a dress and performed a little twirl before she was escorted off stage so she could resume her nap.

There was one moment, unfortunately, that left me feeling off put, where Stirling performed her Indian Bollywood themed number. Visually, yes it was beautiful to watch, but it did come off as culturally appropriating.

That aside, Lindsey Stirling continues to be a stunning live performer who throws all of herself in her music and her live show and those that may be hesitant to watch instrumental music in concert for over an hour will leave pleasantly surprised.

I love to write and I love the arts. I also love combining the two. I'm a photographer and writer for Lithium Magazine, editor and writer for Mooney on Theatre, and blogger for Raw Finery Studio. I'm passionate about music, theatre, fashion, photography, writing, and celebrating sexuality - not necessarily in that order. I drink tea more than coffee, prefer ciders over beers, and sing karaoke way too loudly.

View all posts by Samantha Wu →