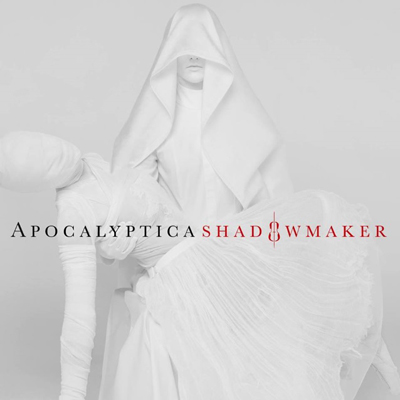 Finnish cello metalists Apocalyptica will release their latest album, Shadowmaker, on April 21st in North America.  It’s the first one to feature the band’s latest member, vocalist Franky Perez, formerly of Scars on Broadway. Though the band often featured guest vocalists on many of their previous singles, the idea to bring in a new leading frontman seemed the most natural progression. It’s a new stage for the band, and Shadowmaker will show if having a regular vocalist will truly take Apocalyptica in the right direction.

Apocalyptica is known the world over for their hard-edged classical covers of metal anthems like the classics from Metallica. In the same vein, they have also given classical pieces like “Hall of the Mountain King” a proper dose of metal. Guest vocalists, and therefore lyrics to their music, were always supposed to feel like a hidden gem on the albums; something to be revered. Those lyric driven tracks were often poignant and eye-opening, or simply fantastic covers that you didn’t expect to hear (Till Lindemann of Rammstein providing vocals for “Helden” – David Bowie’s “Heroes” in German – is something truly rare and beautiful). It is for this reason that the inclusion of a lead singer has many fans perplexed and hesitant.

Shadowmaker, thankfully, has a good number of heavy instrumental tracks to get lost in – “Reign of Fear”, “Riot Lights”, and especially “Till Death do Us Part” are perfect examples. This is what I want in an Apocalyptica album, heavy and ornately melodic cello driven tracks that allow my mind to drift away when I have the album blasting in my headphones. In a strange way, I find it soothing.

On the other side, Perez’s voice does pair well with the rest of the band. Apocalyptica is greatly nuanced – their music can be callous and angry and then mournfully gentle and emotive. “Hole in My Soul” and “Sea Song (You Waded Out)” are both exquisite soul-bearing tracks while “House of Chains” brings out the anger and rage.

Speaking of “House of Chains”, I have to admit that I’m not entirely thrilled by the song; it’s one of the few tracks on the album that doesn’t hold my interest. I find the rhythm, especially in the first two verses, to be rather predictable and at this stage I’m looking for much more complexity and in my Apocalyptica tracks.

That aside, this album is quite exceptional. It’s great to see that Apocalyptica has maintained that refined elegance in their beautiful merge of classical with metal, while bringing into the fold a new leading vocalist that will bring a new level to live performances. It appears the perfect balance: the lyrics don’t take away from the orchestral instrumentation nor the cellos take away from the lyrics. Shadowmaker is a great addition to the Apocalyptica discography and worth exploring.