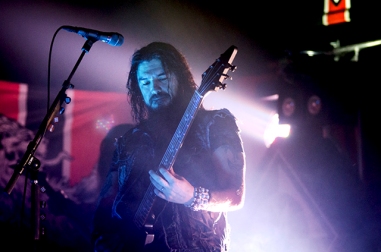 Faintly, underneath the overbearing ringing of tinnitus, are the echoes of pinch harmonics, rampaging double bass, and Robb Flynn‘s snarling vocals from the night before. An Evening with Machine Head, as the title of the tour suggests, delivered on its promise to provide fans, both new and old, a chance to experience Machine Head’s history with a two and a half hour set that would pay homage to the various periods of the band’s extensive twenty-year history.

Upon first arriving at the Phoenix Concert Hall, one could not be more impressed by the diversity of the audience, men and women, young and old; new blood wearing the newest Machine Head merchandise and veterans donning their tour shirts from over a decade ago. Such diversity makes perfect sense given the shapeless nature of the band’s creative evolution, and couldn’t be more indicative of the band’s successful career. Divisions that would normally split a band’s fan base have always been ignored by one of the most loyal and dedicated cult followings in modern American metal, a sentiment that the lead singer and guitarist, Robb Flynn, expressed later in the show when he addressed the audience.

Any skepticism towards this unity would be quickly erased at the sight of the crowd’s reaction to the opening song, “Imperium.” There couldn’t be a more appropriate opener for the event, immediately rallying the cohort of fans to the floor as a massive space was formed for the mosh pit to take life. Transitioning into “Beautiful Mourning” followed by “Bite the Bullet” certainly provided the fans a chance to completely cut loose and embrace the show that, for many Toronto fans, was long overdue. Ending their introductory set was “Locust,” a song that prompted a ferocious response from the crowd, as younger fans (post The Blackening) reacted to what was probably their very first Machine Head song.

The band would take their first short break of the night following the powerful anthem, a consistent trend that happened every three or four songs dividing the night into a series of ‘mini-sets.’ Having attended numerous shows with long, extended set times, too often have I witnessed bands burn themselves out towards the end of the night. Machine Head, however, was able to maintain a consistent performance, and with these sporadic breaks also provided the fans enough of an intermission to catch their breath and endure more. Say what you will, but banging your head and moshing for several hours is exhausting work – a fact that became evident to many of those in the pit.  The further the night progressed the more sparsely populated the mosh became. It would be replenished with bodies at the behest of Robb’s constant demands for circle pits, but for the most part it never reached the same embodiment of chaos that usually frequents such shows. That isn’t to say the crowd didn’t lack spirit, as hundreds of people banged their heads, raised their devil horns, and on numerous occasions sang as one, overpowering Robb’s vocals at several points.

“From this Day” would be the first track to be played from the band’s quasi-Nu metal material that founded Machine Head’s sound in the 90s, and as such, created the first real visible distinction between the band’s new blood and their long-tooth veterans. Not to say the young’uns didn’t engage or appreciate the blast from the past, jumping and banging their heads to the music along with their predecessors hailing from generations before. “Ten Ton Hammer” would continue this crushing trek down memory lane with the crowd again being whipped into a frenzy by Flynn’s charisma. Following a short break, the energetic frontman returned to the stage with an acoustic guitar and before leading into “Darkness Within,” extended a considerable amount of praise to Toronto, the fans, and funnily enough, Napalm Death who were playing the very same night in Ontario’s capital. The crowd returned Flynn’s respect with a thunderous battle cry of “Machine Fucking Head” over and over again.

Yet again there was another break, before the unmistakable intro to the band’s 2001 album Supercharger, “Declaration,” would fade into the speakers and staying true to the track order of the album, harkened the beginning of “Bulldozer.” Again, there was a brief but noticeable split between the long-time diehards and the fresh meat, as the latter stood transfixed, almost in awe of the intense chugging riffs that may have very well been the first time they ever heard the song.

Following the unparalleled brutality of the band’s older material was their newest single “Killers and Kings” serving as an immediate reminder to all that Machine Head has maintained their merciless, rampaging, pissed off form of heavy metal for over twenty years, despite their further inclusion of melodic content. Then, switching from their newest material to their oldest, the signature pinch harmonic riff of the band’s first single “Davidian” rings proud and for a brief moment, in my mind, Rob Flynn had cornrows again, as the crowd jumped in unison to the groove-intensive riffs.

“Davidian” and “Old” would be the only two songs that played from the band’s debut album Burn My Eyes, now twenty years it’s senior. It’s unfortunate, and in this writer’s opinion, the only disappointing point of the night; a rather insignificant one at that, considering the crushing final set that would lead to the end of the night. “Now I Lay Thee Down,” “Aesthetics of Hate,” “Game Over,” “Old,” and finally “Halo” would push the crowd to the absolute brink of exhaustion. “Old” would bring it back one more time for the long-term fans as we all reminisced about our rageful youth before “Halo” would unite everyone together for a final moment of greatness, found in the groove=infected rhythm of Machine-Fucking-Head.